You have not prevented abuse of football and ethics in Turkey for the last 10 months. Here is the result:
Turkish football is corrupted. Match-fixing has been legalised. The criminals have been rewarded; The victims have been sanctioned.

Remember FIFA and UEFA ethics and objectıves. Remember FIFA disciplinary code art. 70/2! Remember UEFA statutes art. 2/2! You have the right and obligation to intervene directly in the abuse in Turkey. Apply disciplinary sanctions immediately. Punish the guilty clubs and save the rights of the innocent ones!
And save Turkish football!
Turkish Fair-Play Platform
Posted by Erkan Saka at 3:53 ÖS Hiç yorum yok:

Besiktas Milangaz Eurochallenge 2012 Champion, MENSAH-BONSU, MR DOUBLE-DOUBLE, IS MVP, 29.04.2012
Besiktas Bring The Cup To Turkey
TURNING POINT: Besiktas, under pressure, reeled off seven straight points in the fourth period and never trailed again. Turkey has waited a long time for a European trophy to come home.
Besiktas Milangaz ended that drought, emerging on top in a pulsating EuroChallenge final to defeat Elan Chalon 91-86 in Debrecen.
Pops Mensah-Bonsu had 26 points and 20 rebounds and was named as the game's Most Valuable Player but it was a collective effort.
Zoran Erseg had 25 and 15 and stood tall so often. Others stepped forward at crucial times.
Posted by Erkan Saka at 3:22 ÖS Hiç yorum yok: 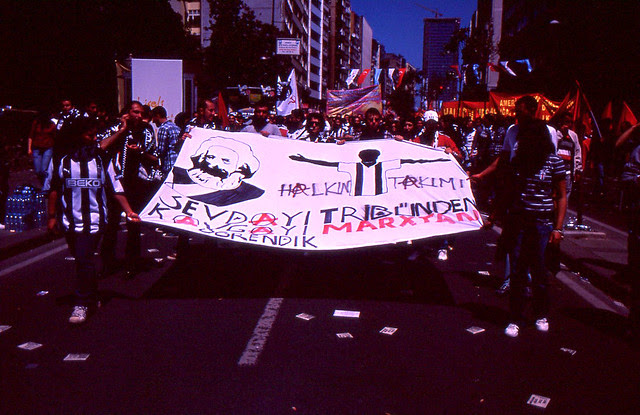 Sinan Bolat has been linked with a move to Beşiktaş. The Standard Liege goalkeeper was in negotiations with the Black Eagles earlier last summer however, talks broke down following the clubs alleged involvement in the match fixing probe. VIA
Posted by Erkan Saka at 12:01 ÖÖ Hiç yorum yok:

Beşiktaş escapes with suspended sentence for misleading UEFASunday's Zaman
Beşiktaş Chairman Fikret Orman (r) and lawyer Emin Özkurt leaving an UEFA meeting in Nyon happily, as Beşiktaş is not banned from European leagues. (Photo: AA) Beşiktaş, one of Turkey's top three football clubs, was given a suspended sentence by the
Posted by Erkan Saka at 1:20 ÖS Hiç yorum yok:

Turkish Football Federation in big time whitewashing (of its own mess)


After all buzz, some football players are used as scapegoats, some symbolic charges and all teams are relieved… So all year drama seems to be about putting FB President Mr. Yıldırım into jail so that he cannot challenge some lapdog businessmen in major bids…

Gala switch off, Fener push on

Super Lig leaders Galatasaray saw their lead at the top of the Championship group cut to a point as they conceded twice in the last five minutes to draw 2-2 at home to Besiktas. Second-placed Fenerbahce closed the gap at the top with a 3-1 win at Trabzonspor to keep their title hopes alive going into their last game of the season, which is against Galatasaray.......
Posted by Erkan Saka at 4:31 ÖS Hiç yorum yok: